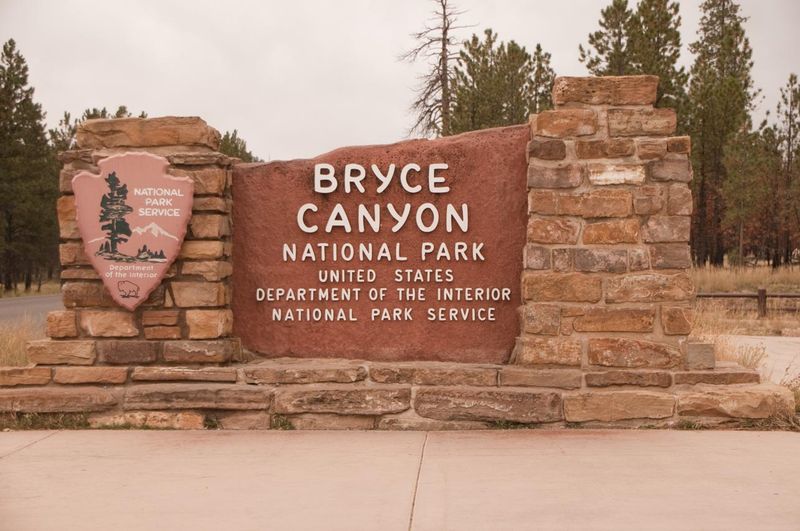 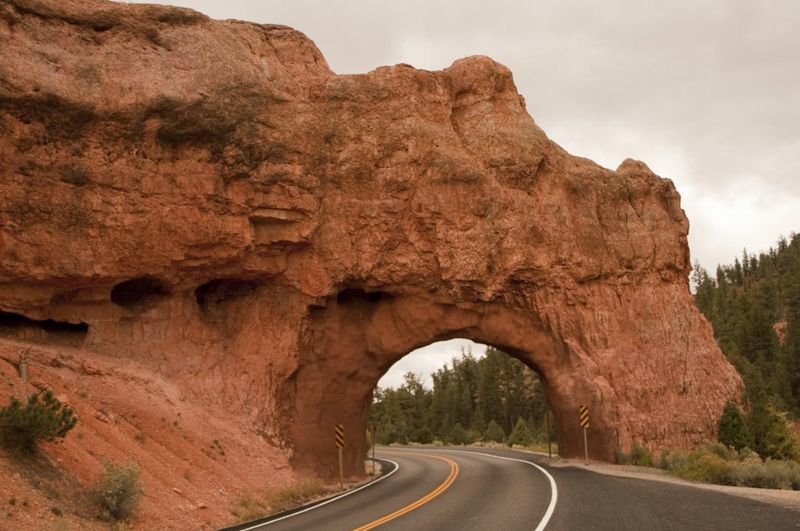 Wednesday was a free day, and decided to head to Bryce National Park.  The park is about 80 miles from Kanab, and as I started the drive, it was overcast.  The more I drove the darker the skies became and of course it soon began to drizzle, which turned into a steady rain.  Bummer.  I can only imagine how beautiful the drive would have been on a sunny, clear day.  But Wednesday was the only day I had to go to Bryce and in spite of the rain; I didn’t want to sit in my hotel room all day. 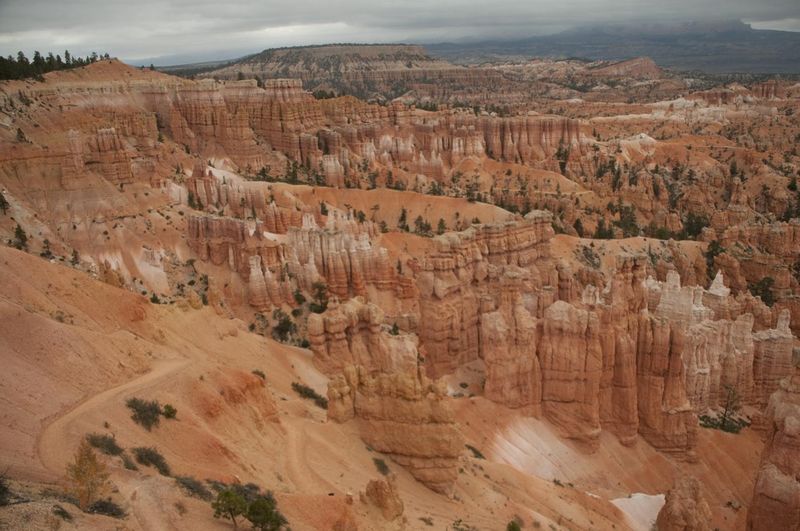 When I got to the park, the rain had abated temporarily.  I went to the lodge and had lunch before adventuring out to take a driving tour.  The lodge is only open for 3 more weeks, as this part of the country experiences large amounts of snowfall.  In fact, while it rain was forecasted for the lower elevations (like in Kanab where I was staying), there was a winter storm warning in effect for elevations over 8,000 feet (Bryce Canyon) for 6” to 12” of snow from Wednesday night through Thursday.  Apparently snowfall this early in the fall is not very common. 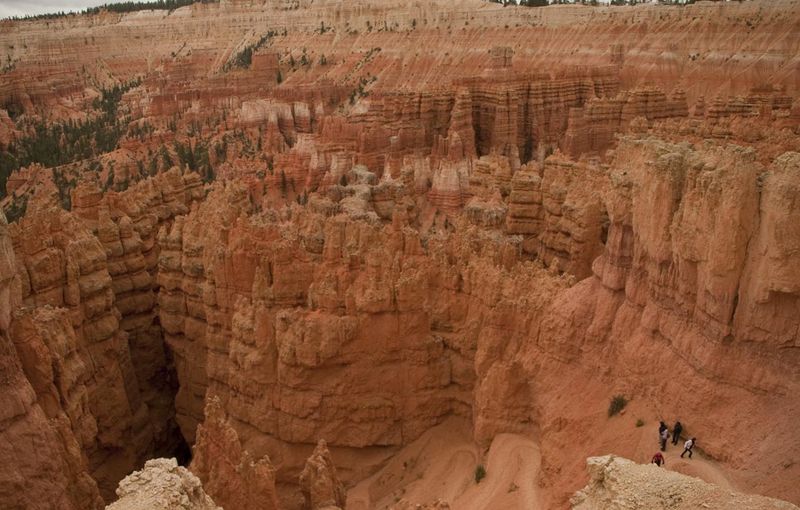 The lighting was no good for photos, but I did the “road kill” photo experience, stop at all of the pull off points of interest, get out of the car and snap some photographs.  (You can see some hikers in the bottom right of the photos). 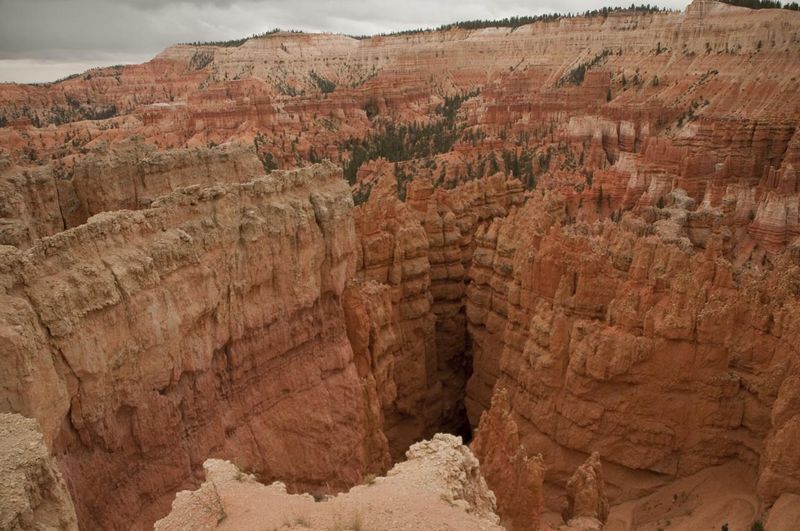 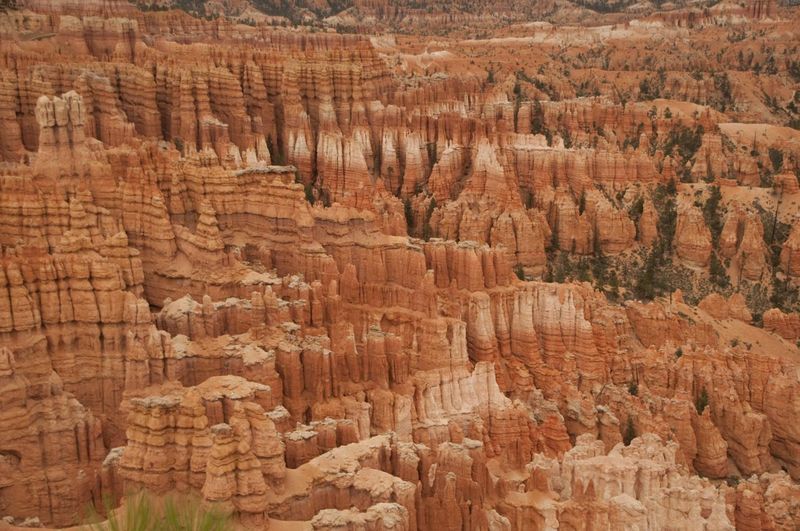 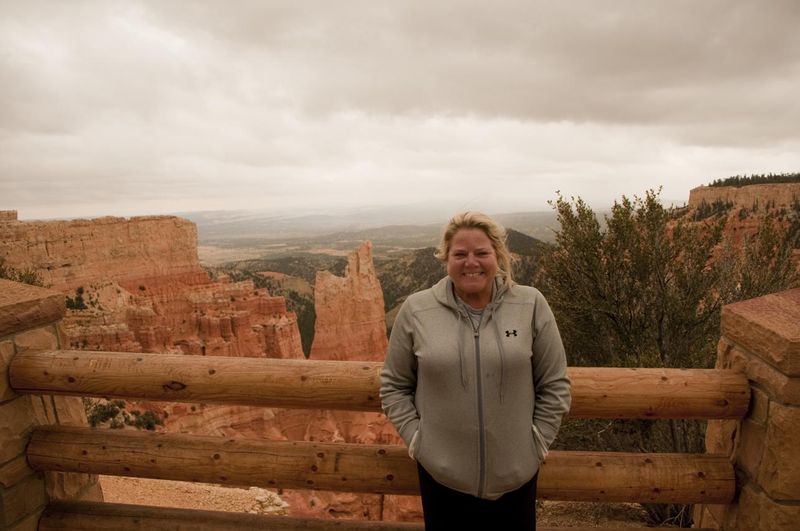 This is me, freezing to death!  It was SO cold and windy. 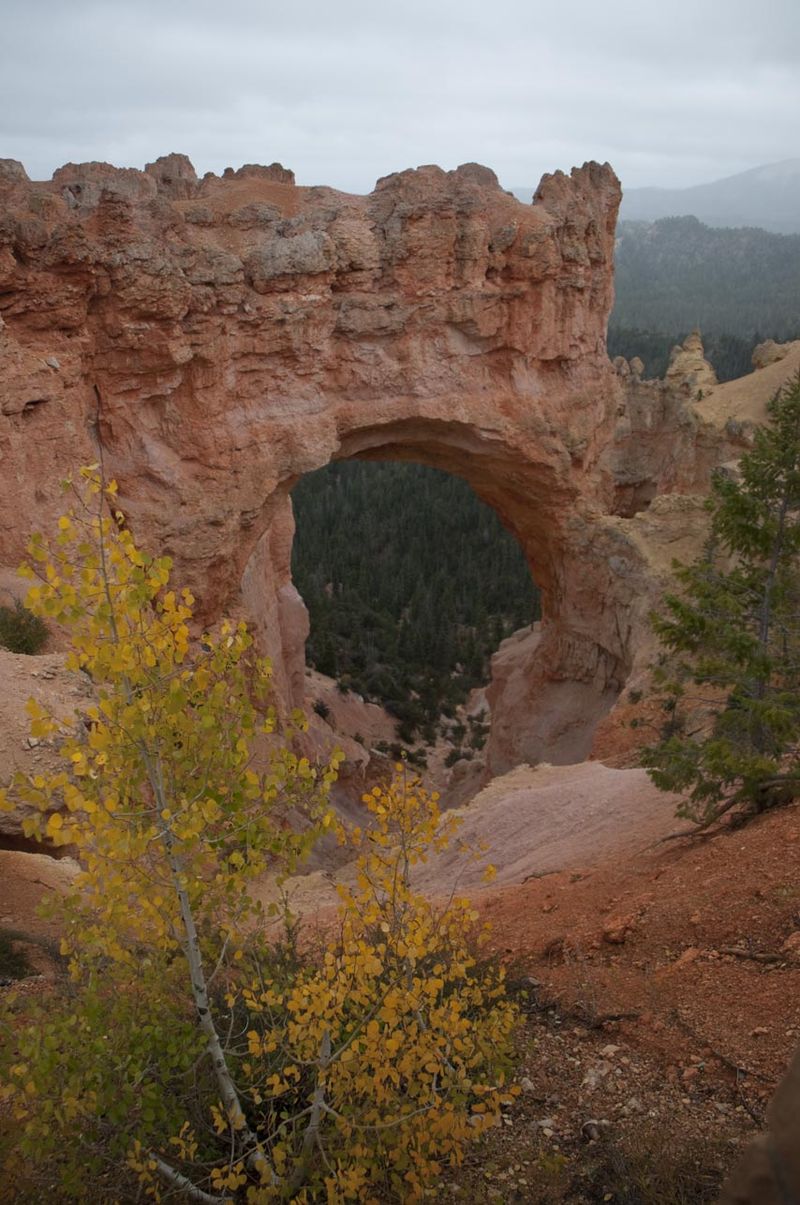 Love this photo of the natural bridge with the aspen tree beginning to change colors. 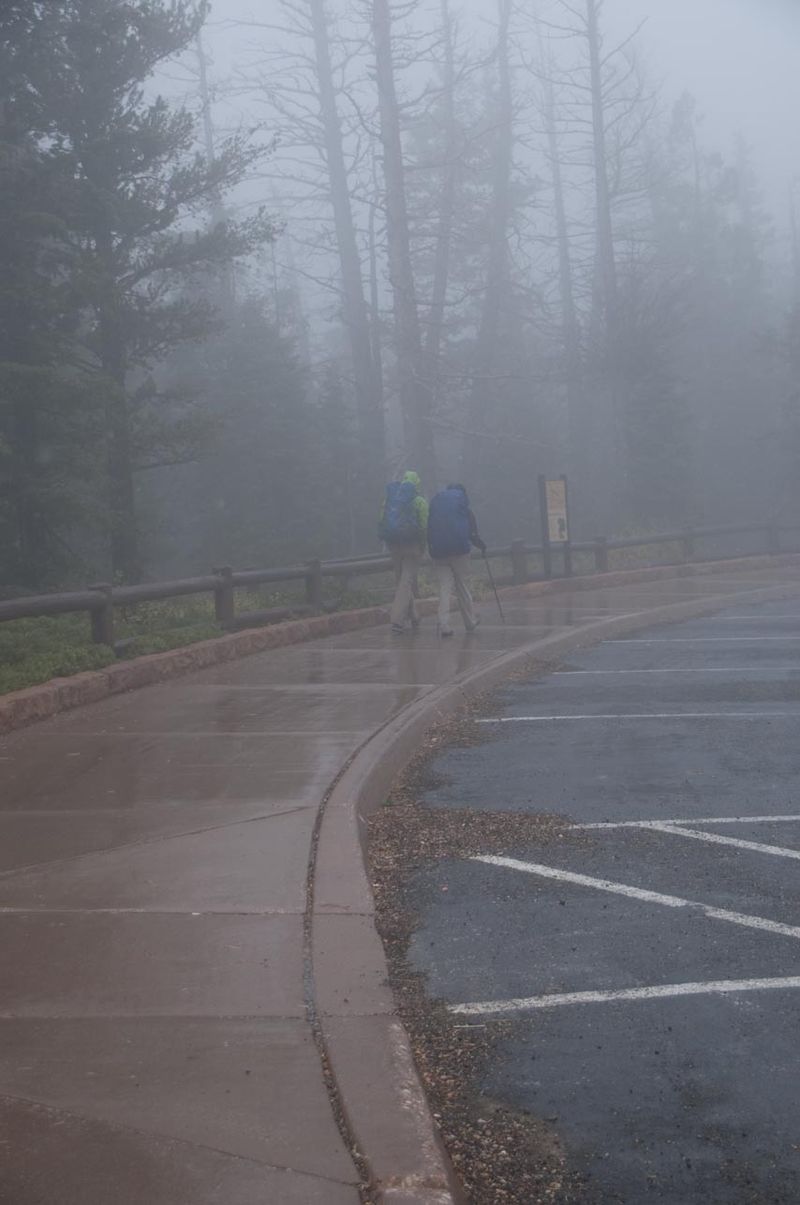 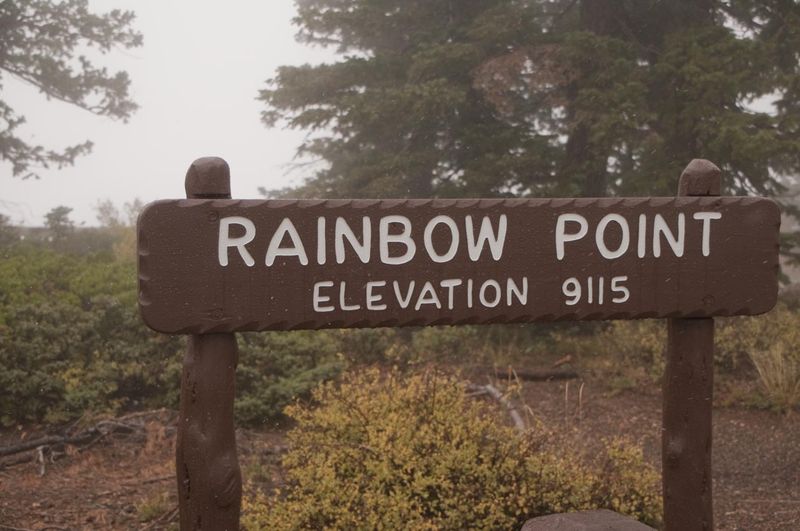 Just a few minutes after leaving the natural bridge pull-off, the weather began to get more and more foogy.  The closer I got to Rainbow Point, the highest elevation in the park, the more it began to drizzle, and then I began seeing snowflakes.  (All of the white specks you see against the brown sign that says “Rainbow Point, Elevation 9,115," are snowflakes.

This was my view from Rainbow Point: 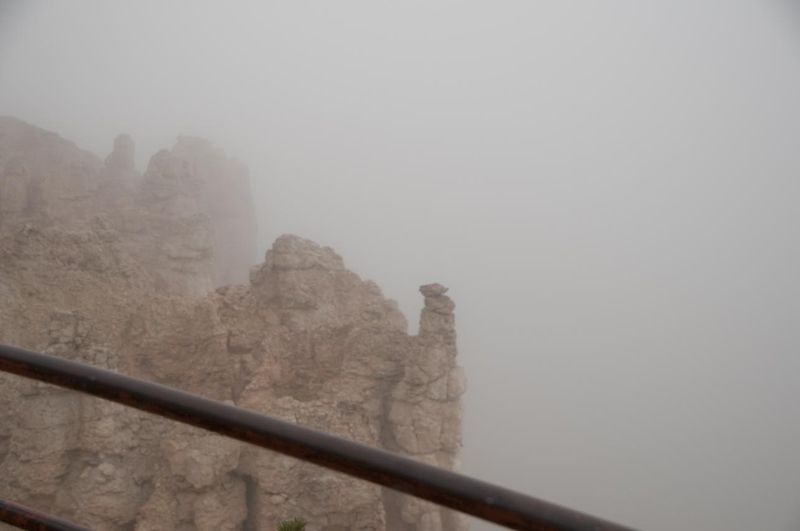 At that point, I turned around and headed back to Kanab.  I had also wanted to stop and take photos at Coral Pink Sand Dunes State Park, but it was really raining, and I  went back to the hotel and spent the evening packing up and editing photos.

I really want to go back to the North Rim of the Grand Canyon Bryce Canyon National Parks and spend a few days next fall touring around and staying in a cabin, and capturing those spectacular fall colors at sunrise and sunset.

I think I may need to make my reservations now.

*(This post was scheduled for Friday, October 7th, but I am experiencing intermittent Internet connectivity in a place that I should have had no problem.  Tech support was no help, but I’ll save all of the rest for another post).

Photos from the Road

Hanging out in the Big Easy