I just spent 9 days at the beach with women in my family – my Mom, my sister, and my two nieces.  It was great reconnecting with them, because we don’t get to see each other very often.  We live in the DC Metro area, but are all spread out with our own busy schedules and hectic lifestyles.  I love beach vacations because the expectation is there to just relax and take it easy – no need to rush to see and do the next thing (except for my sister with the kids – beach, pool, putt putt golf, boardwalk and start over again).

One of the best parts of the beach vacation (and a tradition that I started last year) is the daily appetizer specials:

August 12th:   Tomato and Mozzarella Tarts (I add a splash of Balsamic Vinegar on top of the tarts when they come out of the oven).

August 13th:  Bruschetta and Parmesan Cheese Toast made by my sister.

August 14th:  A white pizza.  (Boboli pizza shell topped with sauteed onions, garlic and mushrooms topped with fresh baby spinach and then topped with Fontina, mozzarella and parmesan cheeses and baked in a  425 degree oven for 10 minutes. 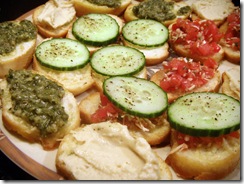 August 16th:  Walnut chicken and salad (the link is to a recipe by Rachael Ray – she used honey nuts which I didn’t like as well as walnuts).

August 17th we had a late lunch at Lombardi’s on 94th Street so no appetizers.

August 18th:  Asparagus in Puff Pastry.  The link attaches to the recipe I generally followed – I made a few changes.  I added garlic and a spring onion to the cream cheese mixture and spread it on one of the sheets of puff pastry, laid down the asparagus and topped with the second sheet of puff pastry.

Yesterday we had to check out of the beach house by 10:00 a.m. so it was a 2 1/2 hour drive home and unpacking and spending time with my guys, whom I really miss when I’m away.  Zachary was here waiting for me when I got home already picked up from the kennel, a very nice surprise indeed.  My stepfather did an amazing job fixing all the damage Zachary caused at the beach house, so no harm done.  I just need to order a new set of blinds that he destroyed trying to get out of the window.

Now it’s back to my regularly irregular routine – work today and tomorrow and don’t know about next week’s schedule yet, and it’s back to school for me on Monday.

Have a great weekend!

Settling Back Into A Routine

Favorite Destinations in the USA Coast to Coast, Part I

Random Thoughts From the Road