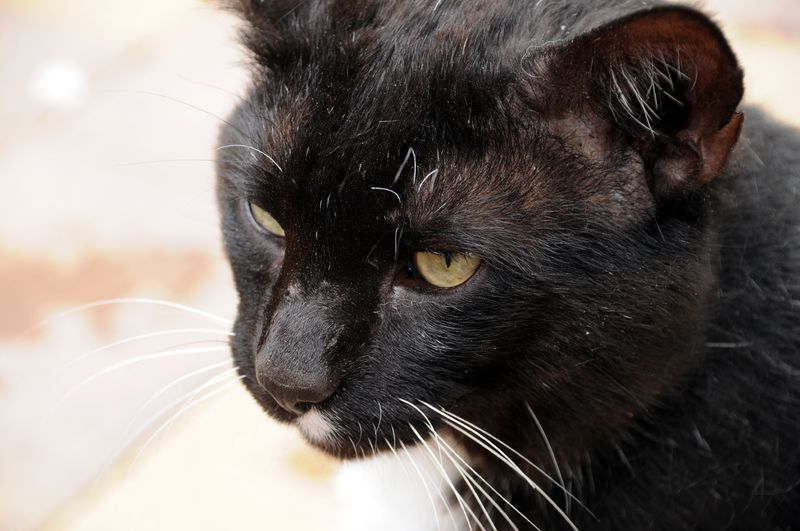 This makes me SO sad — Ranger, a friendly, sweet, loving cat hit and killed by a car sometime early this year.

It makes NO sense to me, that we have decided to "domesticate" certain animals, and then we fail them miserably.

I loved Ranger, and he would have had a permanent home here, but he was a wanderer, I fed him every time he came and petted him, and loved him, and noticed he wasn't neutered.

But he was well fed, and I knew he belonged to "somebody."

When I found out who he belonged to, I "asked" permission to get him fixed, which the father of the girl who owned the cat readily agreed to, and also told me I could keep the cat.  I got Ranger fixed and all of his shots.

But I couldn't make Ranger stay here and be with me.  He was used to being out on his own, and one day his life ended, tragically short.

I knew what happened to Ranger.

You just know these things.

But I didn't want to hear it.

I saw the girl who the cat belonged to yesterday.

She was on her cell phone.

I shouted to her:  "Where is "Midnight?" (which is what she called Ranger).

She giggled, and I don't know if it was in reply to me or to who she was talking to on the phone … "he got hit and killed."

she said "a couple months ago."

She pointed up the street in the direction of my house.

I walked away, and I heard her explaining to the person she was talking to about what happened to her cat.

Sometimes, people just suck — no other way to say it.

If you love your pet, SPAY and NEUTER.

If you LOVE animals, PLEASE ADOPT.

Every pet purchased from a breeder or pet store is one less homeless animal that has a HOME.

Today in the United States of America over 5 MILLION pets are euthanized because they DON'T HAVE A HOME.

Don't contribute to this statistic.

Thank you, on behalf of Ranger.