The lighthouse at Corolla.

This goat and guienna hen were inseparable!  It was SO cute watching this little guienna hen keep up with the goat.  (This was at the light house in Corolla).

After breafast at the Jolly Roger, (with the waitstaff in full pirate dress) I backtracked north up to the lighthouse in Corolla.

What struck me driving from Kill Devil Hills to Corolla was all of the development – nothing but homes, condos, hotels and restaurants.  Are there really that many people coming to the Outer Banks every summer and renting all of these houses week after week?  It seems improbable to me, but what do I know?  I saw even more signs for future housing developments and retail storefronts.  Why does every piece of land in a place like this have to be scooped up by developers?  When is enough, well, enough?

Duck was very quaint, and had I not been stuffed from breakfast, I would have eaten lunch at the Red Sky Cafe.  (Will stop there the next time, Teri).

Began the trek south from Corolla, back through Duck, Kitty Hawk and Kill Devil Hills and of course stopped at the Wright Brothers Memorial.  It just amazed me that these bicycle builders were responsible for the first manned, powered flight.  They were meticulous scientists, recording data and learning from their numerous mistakes.  Even more cleaver, they didn’t fly publicly for 2 1/2 years after the first flights until the patents for their many inventions had been granted.  Orville was an avid photographer and documented their attempts at flight.  Wilbur died prematurely at the age of 45 from typhoid fever, and Orville lost interest in flying and eventually sold his interest in the aviation business. Made a side trip to Roanoke Island, the “lost colony.”  From Wikipedia:  "The Roanoke Colony on Roanoke Island in Dare County in present-day North Carolina was an enterprise financed and organized by Sir Walter Raleigh in the late 16th century to establish a permanent English settlement in the Virginia Colony. Between 1585 and 1587, several groups attempted to establish a colony, but either abandoned the settlement or disappeared. The final group of colonists disappeared after three years elapsed without supplies from the Kingdom of England during the Anglo-Spanish War, leading to the continuing mystery known as "The Lost Colony". One possible explanation is that they were assimilated into the local indigenous tribes."

There was a little 18 minute film about the Lost Colony.  Right before it started two Amish couples sat down in the row in front of me, and the Amish man proceeded to sit there with his arms stretched behind his head totally blocking my view… how rude!  People even heckled that he was blocking my view (thank you guys!) but to no avail. I had to move over to the next seat behind his wife so I could see.

Right next to the Lost Colony was the Elizabethan Gardens.  I love gardens and paid the $8 to go in.  It was so beautiful and so worth it.  It was peaceful and tranquil and I could have stayed there for hours.  There was hardly anyone else there, and I could pretend I was in my own garden ;-)  Except for this statute: 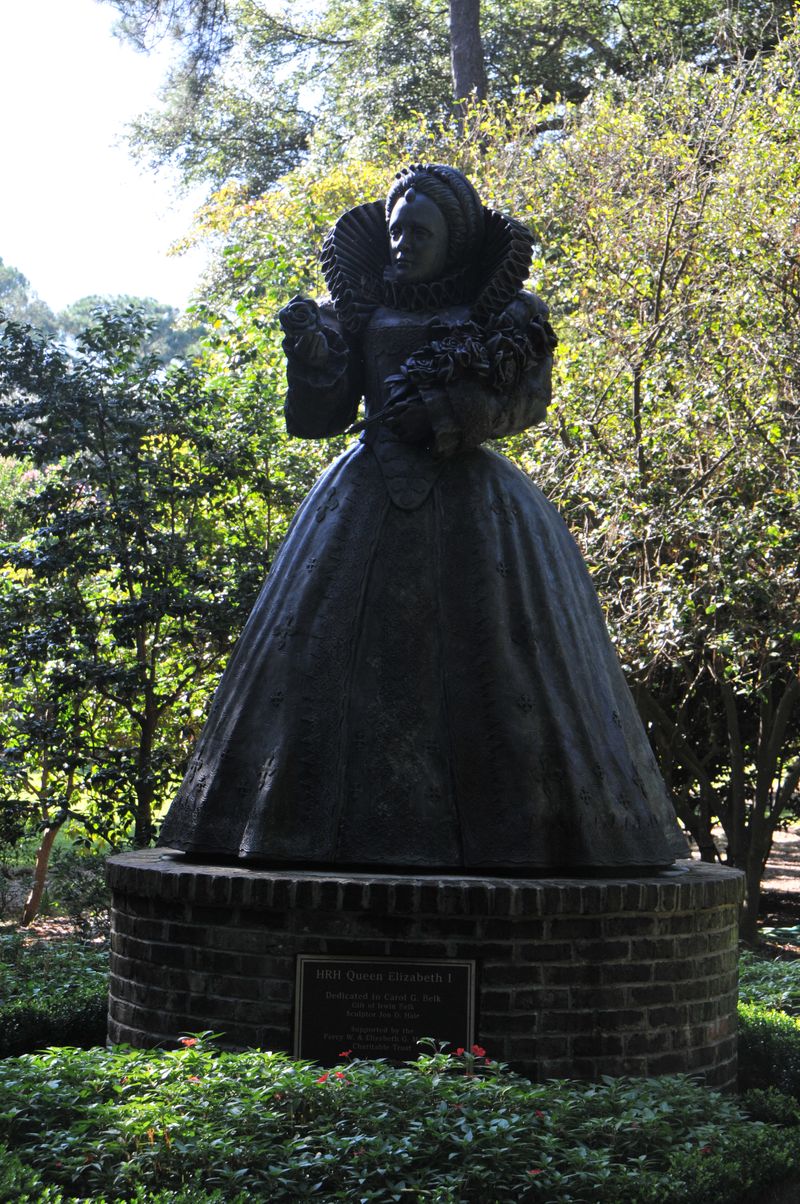 After touring the gardens, I headed back towards Nags Head (named for the practice of tying a lantern to a horse (nag) and walking the beach, thus luring ships into shore for plundering by Pirates.) and went south towards Cape Hatteras.  Talk about a difference in two worlds – as soon as I turned right onto Route 12, I was in the Cape Hatteras National Seashore Recreational Area, and it was deserted – no houses, hotels or restaurants, just the beach in its natural state with the tall dunes obstructing my view of the ocean.  And that’s how it was for 40 miles (with the exception of a few towns dotting the shoreline from time to time, such as Rodanthe, Waves, Salvo, Avon and Buxton.  In these places the development was abundant with lots and lots of houses and restaurants and even a Food Lion.  I also saw Dairy Queen, Subway, and a Dunkin’ Donuts.  However, not many hotels/motels.  The town that listed the most motels was Buxton, which is where I am staying tonight at the Comfort Inn and when I opened the door to my room, the only thing I smelled was bleach.  That’s the beauty of a chain motel…no odors.

Tomorrow, I’m going to go to the top of the Cape Hatteras Lighthouse – 268 steps – hope my legs and lungs hold out.  Then it’s onto the ferry to Ocracoke Island and then take another ferry at 2:00 p.m. to Cedar Island (which will put me back on the “main land".)  Then I’m going to drive along the coast to Wilmington and see what time it is and how tired I am.

Here’s to another adventure tomorrow…