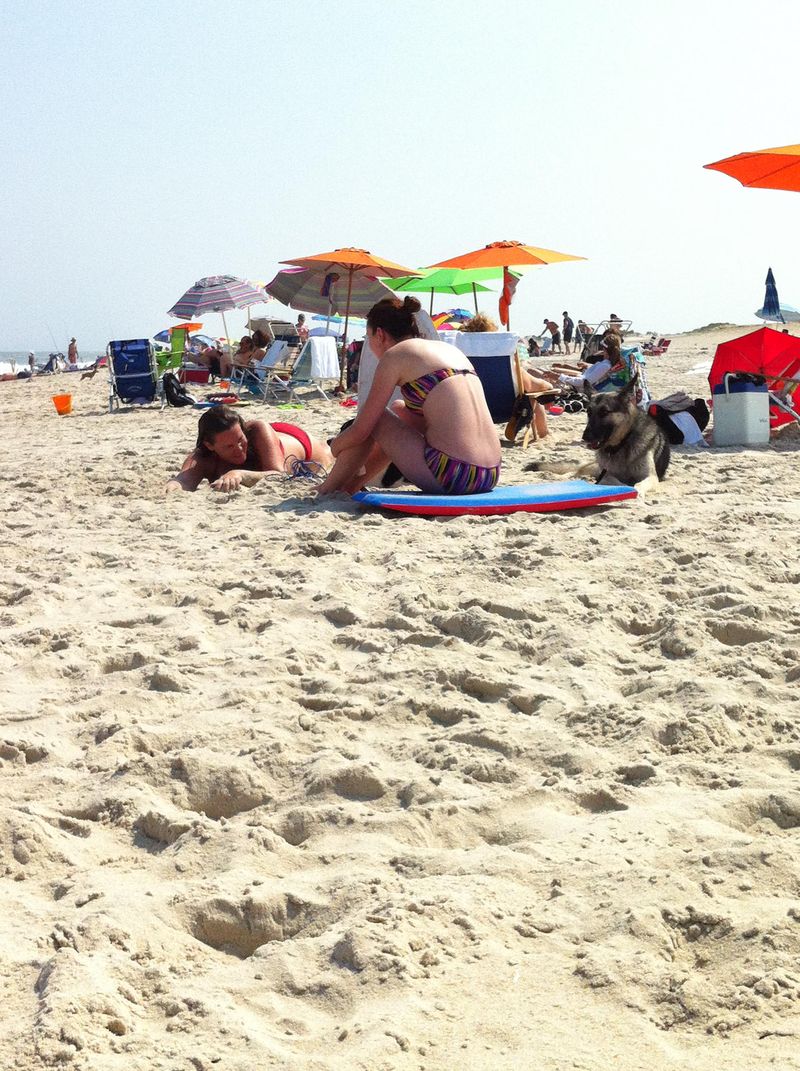 See the woman sitting on her surfboard looking oh so cute, and her German Shepherd laying in the sand near her?  Well, she "made me go there."  To that place where she was so disrespectful I had to do something.  (This is Assateague National Seashore)

People love taking their dogs with them to beaches and parks, but unfortunately, many beaches and parks have banned dogs because their owners refuse to pick up after them when they go to the bathroom.  This is a HUGE pet peeve of mine, and this woman did exactly that — her dog deficated right in front of me on the beach near the shoreline where people walk and kids play.  She clearly had nothing with her to pick up the mess and started covering it with sand.  I told her she needed to pick up after her dog, she shook her head no and kept putting sand over the mess, which further enraged me.  I even offered her a plastic grocery bag to pick up after her dog, and she still refused.  Then two other women joined me in telling her she needed to clean up after her dog, and she kept saying it was fine, her dog had diarrhea and it was too much to pick up.  No excuse.

I told her she was the reason that dogs are banned from many parks and beaches, and she just walked away.  One of the women had a brochure that listed the park ranger's telephone number, so the woman with the dog left me no choice.

I called the park ranger, and reported her, and while I was waiting for the ranger to show up, I kept an eye on the "big pile" of sand to make sure no kids played there or no one stepped in it.  When the ranger showed up, I was asked to provide a statement, which I did, the ranger went over to the pile of sand, and dug up the feces, took a photo of it and then went to speak to the woman with the dog, and she confessed to not picking up after her dog.  So then she was required to pick up after her dog or be arrested, and she was fined (not sure how much).

Why the woman made me go there is beyond me.  However, if she learned her lesson about picking up after her dog, then I'm glad I made the call.

The park ranger gave me his cell phone number and said to call him if the woman harassed me in any way, which she didn't.

After the incident, several people said to me how glad they were that I stood up and said something to the woman and then reported her to the park ranger.

All I said is what's right is right, and went back to enjoying my day on the beach.

Beach Vacation is Winding Down

There is No Crying in Baseball