Something I never thought I'd witness first hand was sheep shearing.  However, when my friend, Julia, (whom I featured here last week here in this space) called me yesterday and said her friend, Anne, who is a sheep shearer, was going to be shearing sheep at a small farm in Annapolis, and asked if I want to come and photograph the event, I said "YES!"  So here are some photos from the shearing: 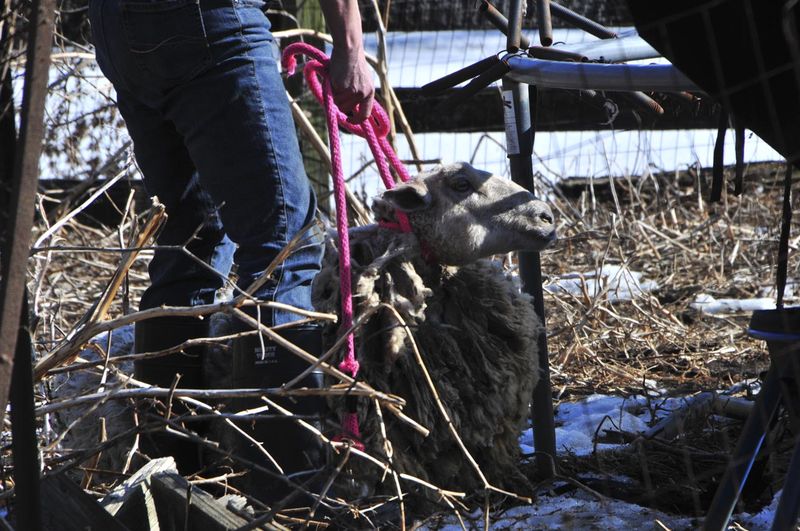 Here is Anne, capturing the last of the sheep (the first two were already "shorn" by the time I got there).  The sheep had been neglected and apparently not shearing the sheep at least once per year can cause lots of health issues for the sheep, from fly strike (which is the infestation of the flesh of living sheep by blowfly maggots) to heat stroke, sores and more–even the inability to move correctly when the fleece tangles and matts.

The lady that owned the sheep died last week and she also had horses and a dog that had been neglected as well, and there are at least 25 (mostly feral) cats on the property (and some of the females are most likely pregnant with kittens).  Very nice and caring neighbors of the woman who owned the animals adopted the horses and the sheep.  The cats are still on the property and their fate is undetermined at this point. 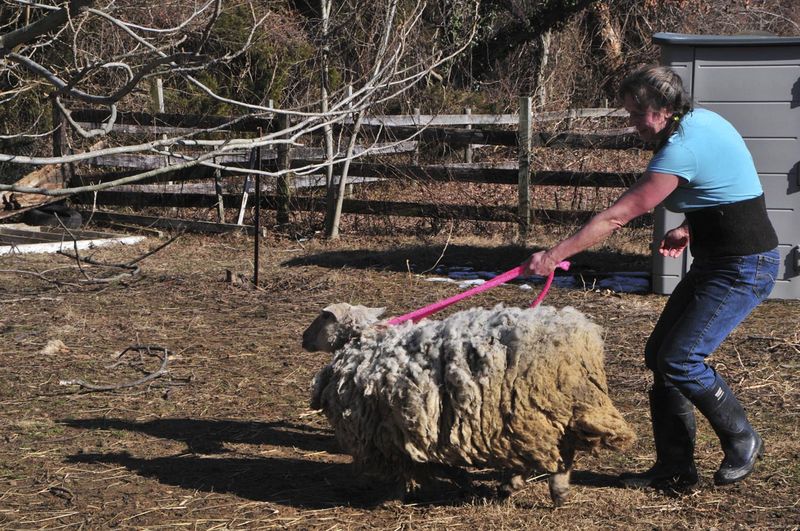 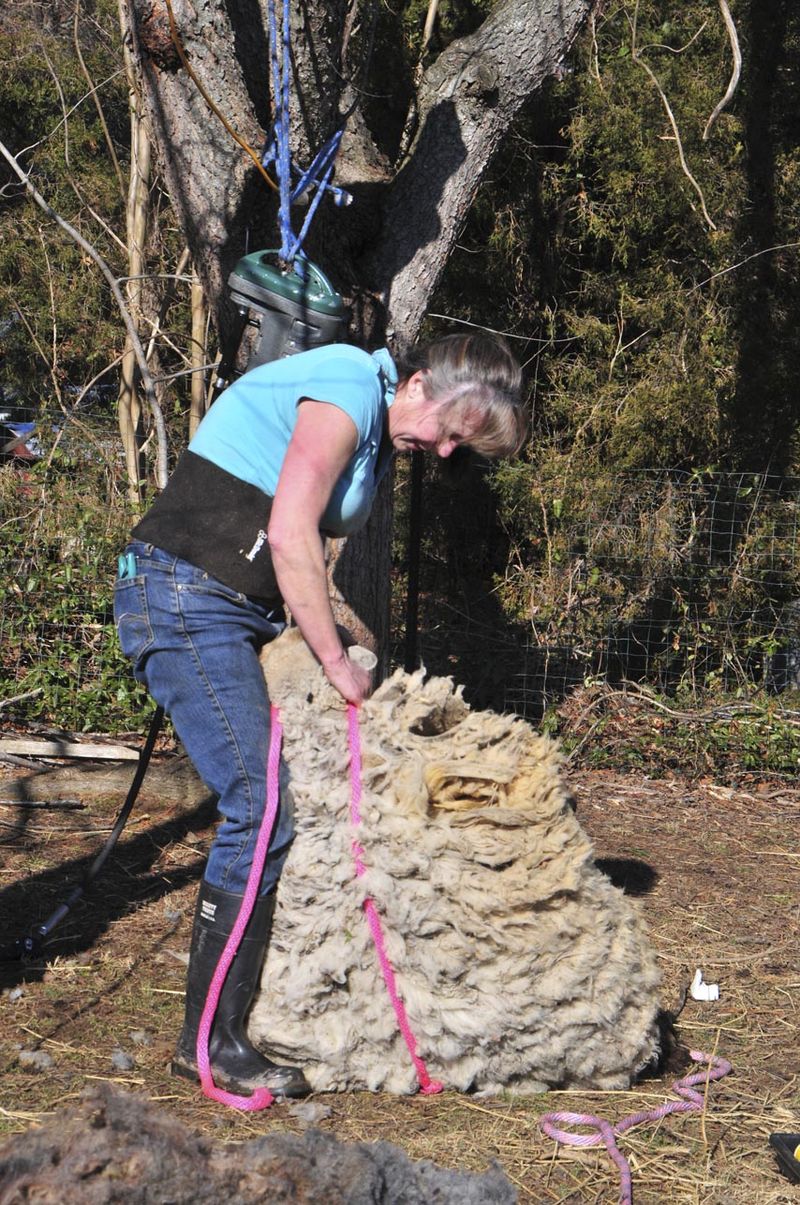 The shearing begins.  The wool is so matted that it can't be used.  It has to be thrown away. 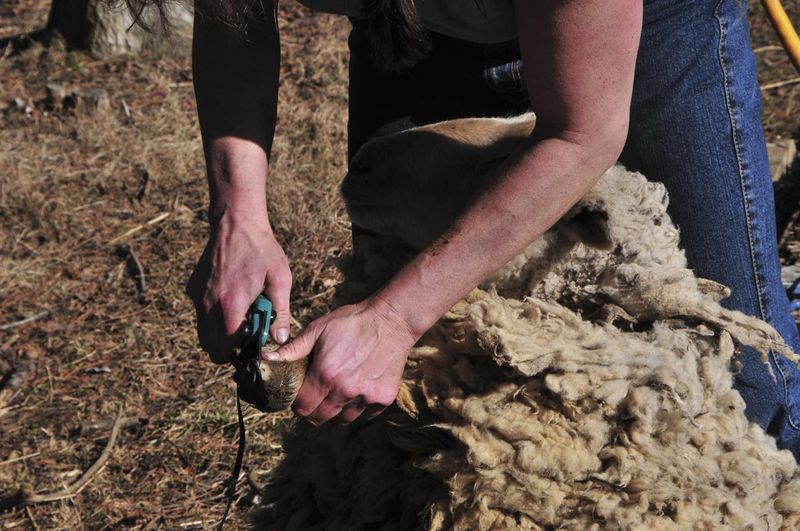 Here, Anne is trimming the sheep's hooves, and showing the new owners how to do it correctly. 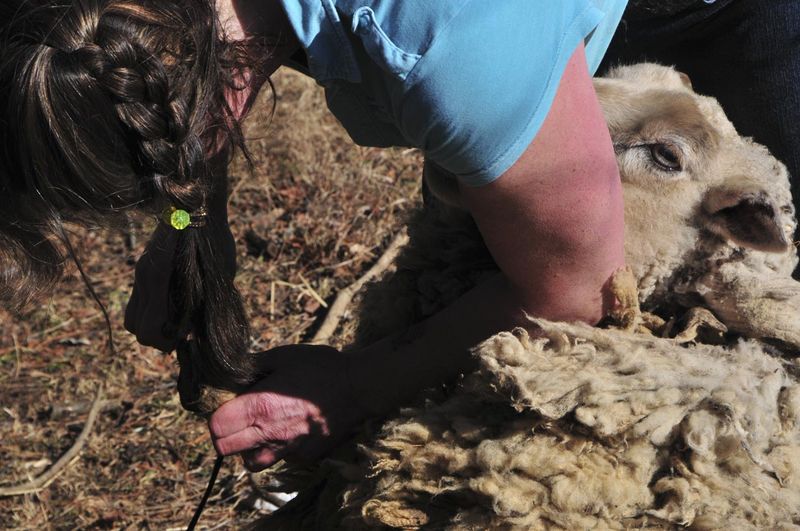 Anne is so gentle with the sheep, the sheep just lay there and let her do her work. 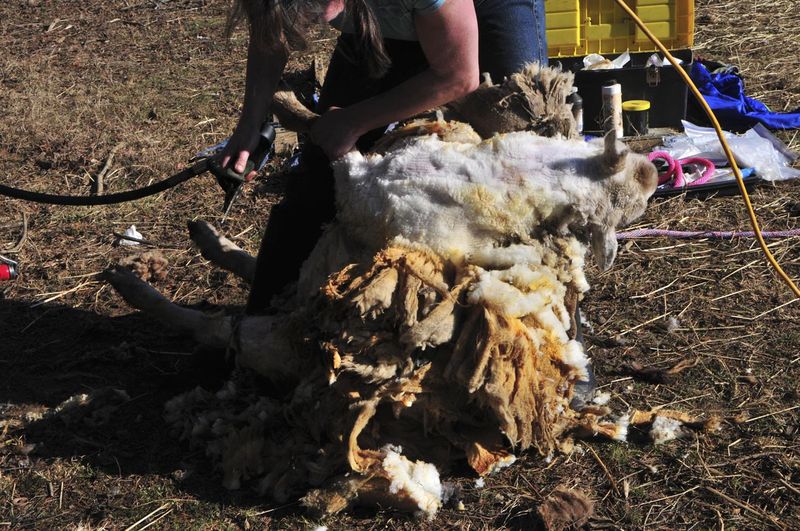 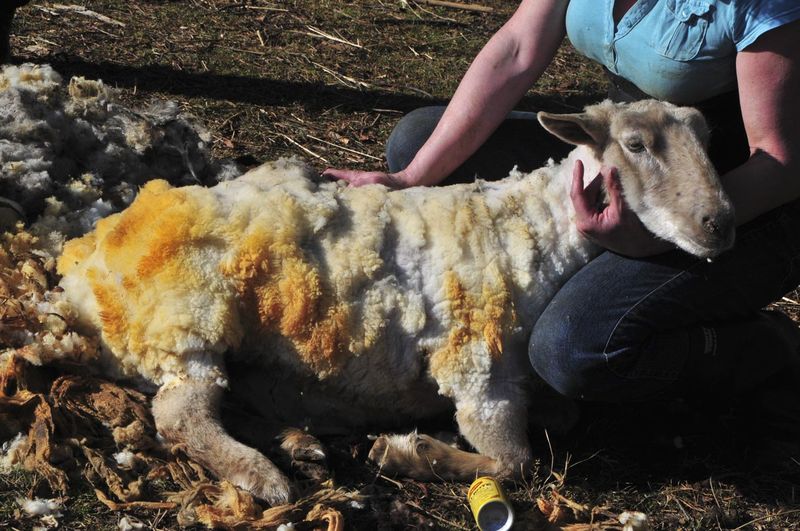 Anne left a couple of inches of wool on the sheep to keep her warm for the rest of the winter.  The yellow staining is lanolin, very common, and nothing is wrong.  However, this sheep is quite heavy and apparently the dominant one, getting more than her share of food. 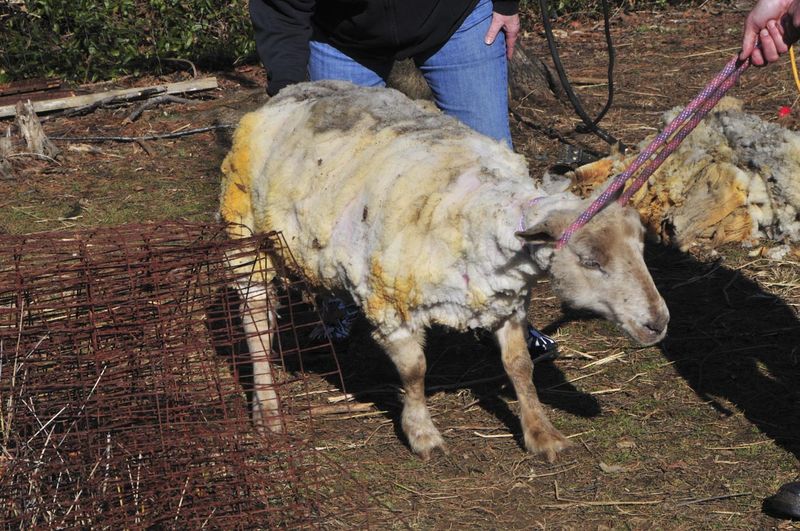 All ready to go to her new home. 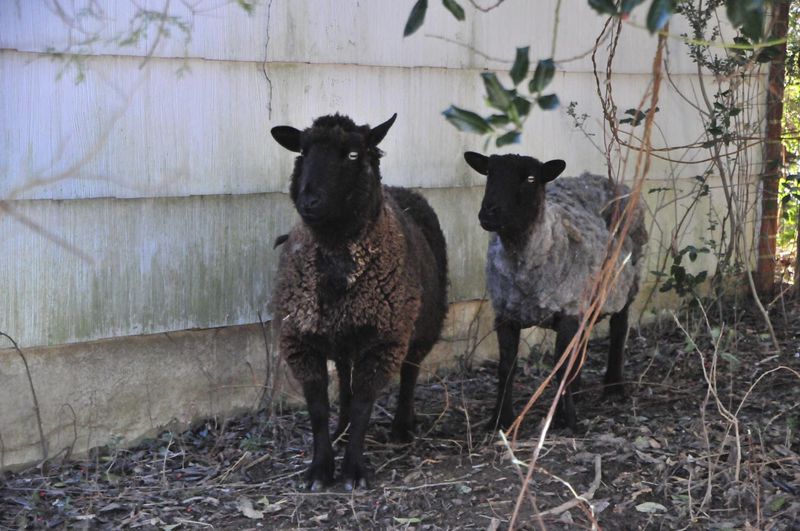 Here are the other two sheep that shared the same pen (and had already been shorn), and they are looking on wondering what the heck is going on. 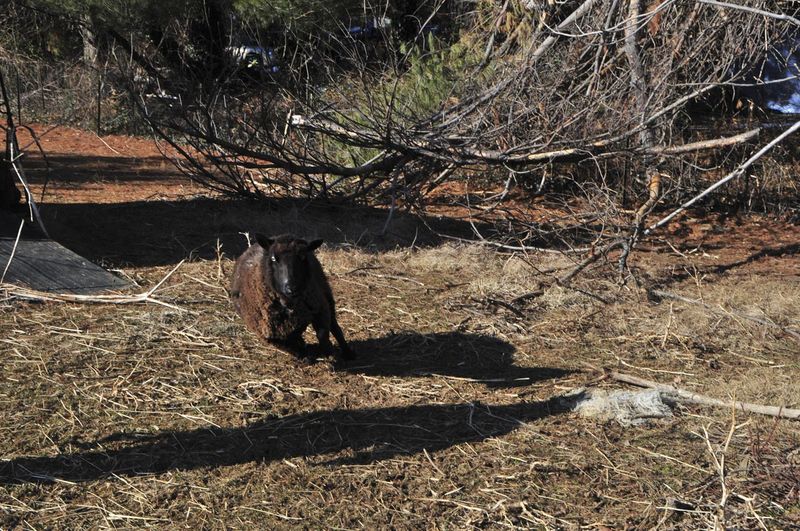 When it was time to round the three sheep up into the covered pick up for the short ride to their new home, this girl wasn't going without a fight. She ran around and around this enclosure, and everyone had quite a time trying to capture her. 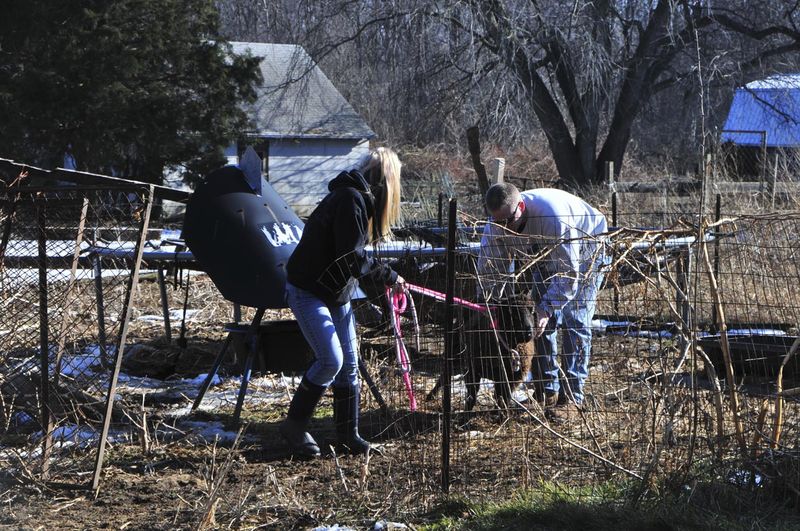 She was finally caught, poor thing was scared to death.  These are her new owners. 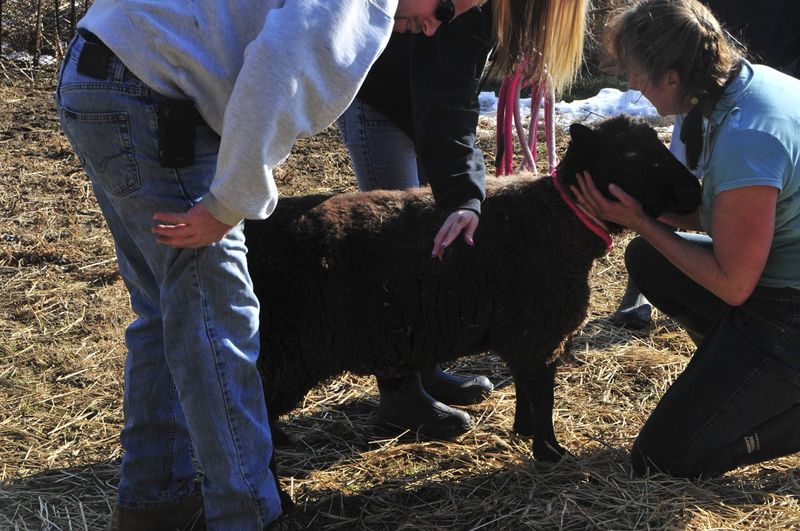 Some calming words of encouragement for the frightened sheep from Anne before being loaded into the truck with her other two friends, and off to a new life in a new home.  I am so happy that these sheep have a happy ending.

Anne founded Star Gazing Farm, a sanctuary for abused and abandoned farm animals back in 2002 in Montgomery County, Maryland.  How Awesome.  Please visit the sanctuary's website for more information, and to find out how you can help.  I am looking forward to visiting the farm in the very near future.

Day 3 Sedona to the Grand Canyon