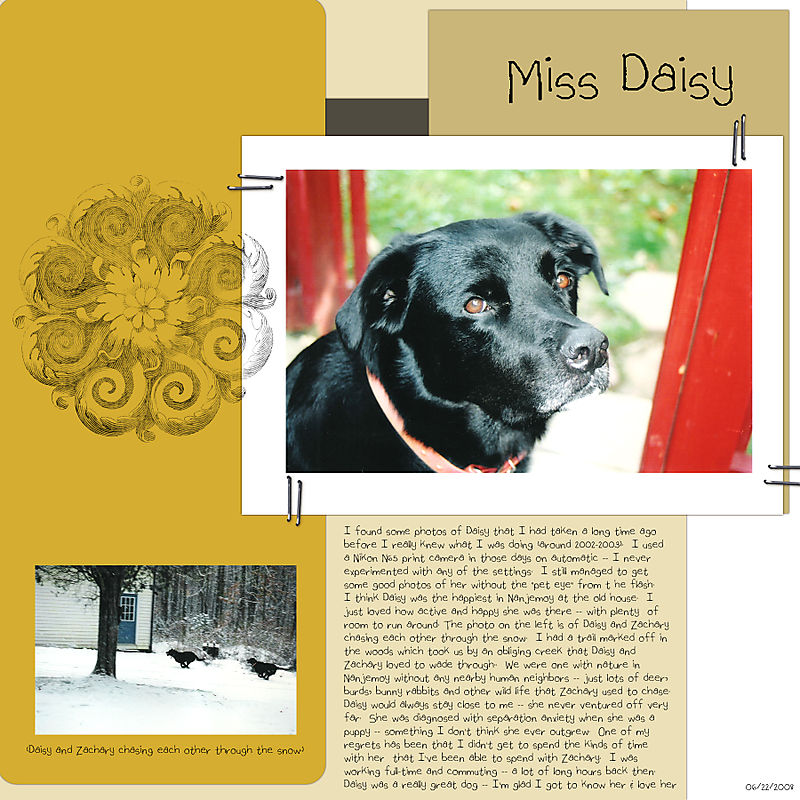 I scanned in a bunch of photos of Daisy this weekend – I ‘m working on a puppy album for her very similar to the one I did for Zachary.  This digital layout I made using Ali’s layered template No. 1 from the Designer Digitals website.  The title and journaling on the layout is my own handwriting font I made on the Fontifier website.  How cool is that????  Having my own font will be awesome for journaling blocks on scrapbook pages or to use in e-mails.  The stamp I used is from another digital kit.  I didn't tweak Ali's design too much — just kept it simple.

I downloaded a free publication — 15 things you need to know about digital scrapbooking – I like to buy a little something as well every so often from the digital store as a thank you for all the freebies I’ve been able to download.   Jessica Sprague (Creating Keepsakes Magazine) is also a very talented digital artist and you can check out her site here.  She offers classes as well.

The longest daylight hours are this time of year, just shy of 15 hours for this area.  It was a busy weekend – my friend, Teri, was here with her husband and son visiting family, and there was a cookout yesterday in honor of their visit.  They have a new puppy, a chocolate lab named Toby, who is SO cute.  I took photos with Teri’s camera and didn’t even think about my own camera!

I went outside around noon yesterday and found an injured bird on the front porch.  There wasn’t any evidence of the bird being attacked by a cat (no visual wounds) so I think it may have flown into the glass window of the house and injured its wing.  I contacted a wildlife rehabilitator, and hopefully the bird will survive until it can be looked at tomorrow – the facility was closed today.  The lady on the phone said that if the wing can be set, I can keep the bird until the wing heals and the bird can be released in its own territory which would be SO cool.  I have the bird in my smallest cat carrier with some water and wild bird seed.  I covered the carrier with a towel and and placed it in my bedroom with the door closed.  I’m keeping my fingers crossed that the bird survives through the night.  It’s not a starling – it could be either a crow or a raven, I’m not sure.